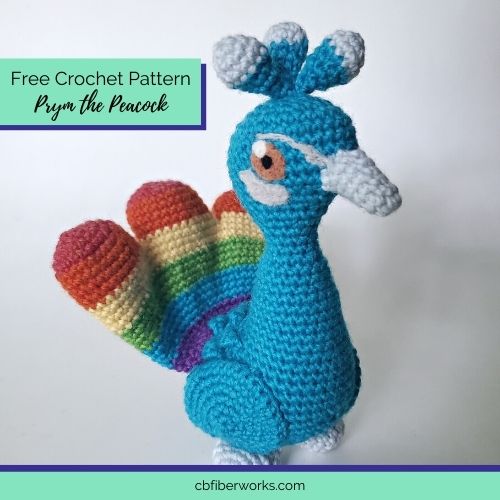 Happy Pride Month! I’m so incredibly excited to share this month’s pattern for a couple of reasons. Pride is very special to me and here at cbfiberworks I want to create a community of kindness and inclusivity–a place where you can be you! Peacocks are fascinating animals and they naturally ignore gender stereotypes with the males being the ones to grow those beautiful and iconic feathers. I’m proud to present this month’s free crochet pattern: Prym the Peacock!

©2022 cbfiberworks. This pattern or it’s parts are not allowed to be redistributed, copied or resold. Any items handmade by you from this pattern may be sold, but please credit me (cbfiberworks) as the designer.

This post contains affiliate links, meaning if you make a purchase using my link, I’ll receive a small commission at no extra cost to you.

I had an amazing group of testers for this pattern and I was absolutely blown away by their awesome creations! Check out their peacocks made in all sorts of beautiful colors.

Want to take this pattern on the go without having to worry about wifi, grab the ad-free printable pdf in my Etsy or Ravelry shops for just $5! Grab your copy here!

Rnd 0: MR6 (Place your stitch marker in the first st)

Place a stitch marker in the 3rd decrease from Row 10. This marks the center line of the head.

If you’re using safety eyes, place them between Rows 7-9 with about 8sts in between. If you’re embroidering or felting eyes, you can place them at the end.

NOTE: Rows 30 and 32 include the feather stitch. Refer to the Project Notes above for instructions and the video tutorial.

Continue stuffing the neck and body. As you keep stuffing, insert the 3-4 marbles into the body toward the front chest. (This is to help balance Prym later since the tail is heavy.)

Fasten off and weave the remaining yarn tail into the body.

NOTE: Rows 5-9 are worked in flat rows and the stitch counts only include the stitches in those rows. The ch 1 doesn’t count as a stitch.

NOTE: Rnd 10 is worked down the sides of the short rows and around Row 4.

Fasten off with a short tail and weave in the remaining yarn tails.

Rnd 0: MR6 (Place a stitch marker in the first stitch).

Switch to Color A. Cut and tie off Color B, tucking any yarn tails into the head feather.

Rnd 0: MR6 (Place a stitch marker in the first stitch.)

Fasten off (leaving your stitch marker in place) and make 2 more (repeating Rows 0-8). When you finish the third, don’t fasten off. Press all 3 flat with the stitch markers in the corners.

Row 9 can be a bit tricky so if you need help, the premium pdf contains 60+ photos and video tutorials. Head to Etsy or Ravelry to grab the printable pattern today.

Switch to Color A.

Fasten off with 16-18in. tail and don’t stuff–just press flat.

If you’re tired of scrolling and would rather just check out the condensed pdf, you can grab a copy of Prym the Peacock on either Etsy or Ravelry.

Pin the 3 head feathers in a cluster on the top, center of the head (about where the MR is). Use the yarn tails and a tapestry needle to sew each one to the top of the head. Weave any remaining yarn tails into the head.

Pin the wings to the sides of the body with the top edge (on both sides) touching the feather stitches from Rows 30 and 32. Cut a length of Color A (about 12in. long) and sew along the front edge of the wing only.

Press the feet flat and pin them to the bottom of the body at an angle (see photo
below). Using the yarn tails and a tapestry needle, sew the outermost edge of the foot to the body, then the innermost edge. Then weave any remaining yarn tail into the body.

Pin the tail upright, following the curve of Row 33 (of the body). Using the yarn tail and a tapestry needle, sew the bottom edge of the tail to the body all the way around. Weave the remaining yarn tail into the body.

If you used safety eyes, ignore the felting instructions for eyes. Or if you don’t want to felt, skip this part. Place pins in a circle for both eyes. Then use a felting needle and poke the brown wool roving into place. Poke the black wool roving in the center to create the pupil. Poke the white wool roving over the top of the iris and pupil to create the highlight.

Then place pins leading from the beak over the top of the eyes. Use a felting needle and poke the silver wool roving into a thin line.

Place pins in a curve under each eye. Use a felting needle and poke the silver wool roving into a thick curve under the eye.

I hope you’ve loved making Prym! If you want to share your project on social media, I’d LOVE to see it! Just tag me (@cbfiberworks) on Instagram, Facebook, Pinterest or TikTok. I can’t wait to see what amazing color combinations you use!

If you loved this pattern, be sure to Pin it for later and share it with your ami-loving friends! And if you’re not subscribed to my newsletter, scroll up or sign up here, so you’ll be the first to know about any new patterns and events (I have so exciting news coming very soon!).